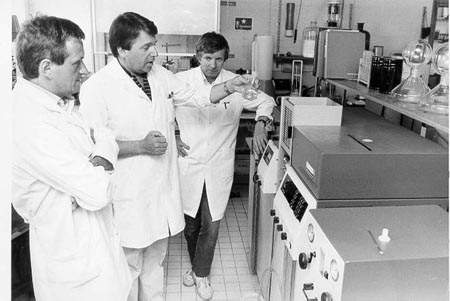 When Lars Wilöf met Gunnar Jegrelius sometime in the early 1970s, Lars's idea was born to start a company for marketing Gunnar's products to the paper and pulp industry. At that time, Gunnar had a company located in Vadstena called Glycocide.

Gunnar was a member of the Royal Swedish Academy of Sciences and adviser to WHO (World Health Organization) and FDA (US Food and Drug Administration). He was an environmental visionary who was ahead of his time. In 1981 he passed away 60 years old and at the peak of his career. Gunnar Jegrelius left behind an impressive library of 6 million documents from the 1600s to 1989. These documents deal primarily with ecotoxicology and toxicology.

Many of Gunnar's recipes are still used and are very difficult to improve in terms of efficiency and environmental data. After Gunnar's death, his work lived on through the disciples Magnus Molander and Johan Lassus who formed the company Vadstena Kemanalys.